skip to main | skip to sidebar

Cameroonian Vacay Part I: Chad and the Extreme North

I just put my friend Shawn on the plane and let me say, that is a vacation to recover from--no relaxing daiquiri-sipping on a beach! (Although for the record I have absolutely no aversion to such activities. And actually, we did drink some cheap boxed wine on the beach. How's that for classy?)

In the roughly three weeks that Shawn was here I think I doubled the amount of Cameroon I've seen. It sounds cheesy as hell, but Cameroon is often called "Africa in miniature." I see why. It blew my mind to see the posts of several of my friends, and just how different their Peace Corps experiences are, all in the same Cameroon. Since the trip was long, I'll probably break this into a couple of blog entries, but starting with...

I went to your average country-next-door-in-conflict, Chad, to pick up Shawn. Sadly, pretty much every country surrounding Cameroon is either under a dictatorship or is just a little sketchy, so my travel options are kind of limited. I crossed the border into Chad with no problem, I believe largely due to the fact that I was wearing my ugly green women's days pagne. Wearing local fabric and clothing really does give you so much credibility here. At each of the border checkpoints I received the same smiles and nods, "Ahhh, you live in Cameroon, yes, it shows! Pass right on through."

Before heading to the airport to fetch Shawn, I went for a quick walk around the neighborhood in N'Djamena. I got the most whistles from a group of women sitting at a bar. When they signaled me over to join them, just for kicks, I complied. Once again, thanks to my ugly women's day pagne that had gotten their attention! They quickly proposed a Chadian husband for me, and showed me the Chadian version of the women's day wear--it comes in teal there--sweet!

The architecture in N'Djamena is slightly different from on my side of the border--you can see the increased Muslim influence. More little turrets and mosques on every corner, and much more writing in Arabic. It's directly upon crossing into Chad that Fulfulde as a lingua franca seems to stop, and Arab Shua takes over. The huts in and around N'Djamena are also different from those of much of northern Cameroon. Some of the huts reminded me of the very square mud structures I'd seen in Mali, and others were bigger, taller structures--the driver explained it was because the Arab Shua people who dominate this area are so tall.

A few more subtle things I noticed about Chad--there seems to be an undercurrent of energy that I hadn't felt in Cameroon. I actually saw buildings with names of political opposition parties on them, something I have yet to see in Cameroon. The Cameroonian driver of the car kept saying, "Ah, Chadians, so aggressive, a mean people!" I, however, like that fire in their blood--it's a relief to see people rise in action as opposed to the passive acceptance that I feel pervades Cameroon. That said, Chad is a tough tough place. The eastern side of the country is plagued with rebels spilling over from Darfur, and Peace Corps got out of there back in '06. In early '08, rebels from the East stormed through N'Djamena aiming to unseat dictator-du-jour Idriss Déby. Our driver showed us avenues that used to be tree-lined but now were recovering from the invasion. N'Djamena reminded me of the Haitian capital Port-au-Prince, with its overwhelming presence of foreign UN security workers, and gave me a familiar pang of sadness.

What happened? Beer has tasted disgusting for as long as I can remember. (That's why I drink a lot of whiskey sachets.) After Shawn's late-evening arrival, we escaped from the Catholic mission where we were staying and ran down the street for him to have his first African beer. We had to convince the bar-man to keep the place open for us. But I had totally forgotten--beers here are .65 liters--that's about twice the size of any old American beer. So when Shawn got his beer, he got a little wide-eyed, and as a good hostess, I was obliged to help him drink it. And for whatever reason, beer stopped tasting awful for the first time in 27 years. I'm (not so) proud to say that in the past three weeks I have now roughly octupled my lifetime consumption of beer. Thanks Shawn :) At least I am supporting a Cameroonian industry.

Taking Shawn around Mokolo was great fun. Naturally, if I'm toting a male of my age around my town it is because he is my husband/future husband. We visited a local chief who has 50 wives, who commented to Shawn, about me, "Obviously this is your your future wife, as you came so far to see her." I didn't try to explain frequent flyer miles in Fulfulde. I think the chief also sized me up and added something along the lines of "She's worth it," which I'll take as a compliment!

Visiting my favorite neighbors with Shawn was also entertaining. I'd previously explained to them how in the States, before deciding to get married, men and women often talk about things like how many babies they want to make, and that the couples do not typically have the twenty-year age gap, as is readily seen in Cameroon. So we went by Aissatou's house, and after promptly ordering us to eat mangoes, she began questioning us. Just for the hell of it, when she asked me if Shawn was my future husband, I just looked at him and said, "Yep!" When she asked how many kids we were going to have, Shawn proudly announces "Ten or twelve!" I think Aissatou and her family got a kick out of my shocked face, and fortunately, Shawn knew how to say "I'm joking" in French. (Yeah, he better... so much for all my women's lib educational efforts!!!)

I also took him to meet a friend who runs a small local NGO, Mamoudou. I'd mentioned to Mamoudou that I wanted to bring Shawn by, and in a typical bit of hospitality, Mamoudou had planned an entire day's excursion for us that I had to gracefully get out of. Mamoudou is very go-hard-or-go-home. He doesn't do anything halfway. When he writes requests for funding projects, he puts in flowery statements about the poor thrusting their feet against the stones of Mokolo. When he asks me to edit, I usually nicely cut out those lines and throw in some more western-style statistics. So Mamoudou went straight for the jugular with Shawn, in his nice and hospitable way. Within probably fifteen minutes of our arrival, Mamoudou asked him, "What is your definition of development?" And then, "So what knowledge will you take away from Cameroon and us, the poor, after your trip?" Fortunately, in addition to the questioning, we got to take away a fabulous lunch. Mamoudou's wife is a great cook, and she'd made some traditional couscous and sauce--Shawn's birthday lunch, in fact! We ate together in the traditional way, with our fingers burning on the hot couscous, at a little table on the dirt floor, as all seven of Mamoudou's kids came through to greet us. I love it when my varied worlds collide.

Back to the present: I've just had a meeting down in the capital, Shawn's safetly back in America by now, and I'm about to get on the long long train to head back home to the Extreme North. Vacation is over and no more ice cream for me, but I'll write more about the trip in a next blog. À bientot! :)

Posted by Kate Fleurange at 2:11 PM

Hi Kate,
Enjoy your blog as well as hearing first hand about your adventures with Shawn. Hope to see you soon.
Maureen 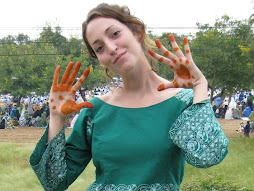 Oh wait, that's a guinea pig! But isn't he cute?

Here's the Guinea where I live.

My social life = My bookshelf (or, books I’ve read since arriving in Cameroon)

This blog expresses the opinions and experiences of the author. It does not represent the opinions of the U.S. government or U.S. Peace Corps. Peace.